**DISCLAIMER: THERE ARE SOME REALLY FUCKED UP PHOTOS BELOW. READ AT YOUR OWN RISK 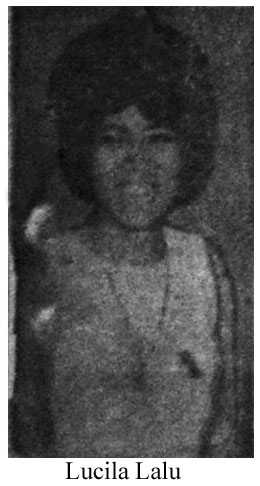 The term chop-chop lady is something most Filipinos would recognize. With English being our second language, some words are borrowed and snuck into our everyday vocabulary, as if we invented the universal language itself.

Now chop-chop lady is anything but pretty – it refers to a body of a woman whose remains are chopped into inappropriately smaller pieces – the head being decapitated (in most cases), torso, limbs, some even do the extra effort of severing each finger and toe – the whole nine yards of mutilation. You get it, right?

As Filipinos, atrocities are like a breakfast value meal at Jollibee – they exist, but you don’t always get ‘em.  News like this appears from time to time, albeit not every day. When we do hear one, the nation automatically huddles into paranoia, in fear of the maniac who’s keen on chopping off humans.

For the local press, 1967 is the year when Lucila Lalu outranked the Arab-Israeli War on the front pages.

Her case was highly sensationalized, given it happened in 1960s Philippines, and hers was abnormally scary as fuck because they found her legs first, chopped expertly into four pieces and wrapped in a newspaper, in a garbage can on Malabon St., Sta. Cruz. A day later, her body, headless and legless, was found on a vacant lot along Epifanio de los Santos Avenue. It took time, of course, to identify her in the little pieces, but the police managed somehow to get fingerprints off the dead hands which subsequently found to match those in a police clearance file on one Lucila Lalu. The suspects of the case included her 19-year-old lover, Florante Relos, Patrolman Aniano de Vera, and Jose Luis Santiano, a 28-year-old dental student.

For the local press, 1967 is the year when Lucila Lalu outranked the Arab-Israeli War on the front pages.

As the case developed, the sordid side of Lucila’s life rather than her murderer surfaced. Reports poured in that Lucila had other lovers and the police responded by hunting them. The testimony of eager beavers in the case was varied and contradictory. Lucila’s neighbors claimed they saw three men dragging what looked like a body from Lucila’s residence. Vera claimed he saw Lucila hale and hearty hours after the neighbors “had seen” her body being dragged away. A friend of the victim stated that Lucila wanted to end her relationship with Relos, but Relos swears the woman was very much in love with him. And so on, and so forth. 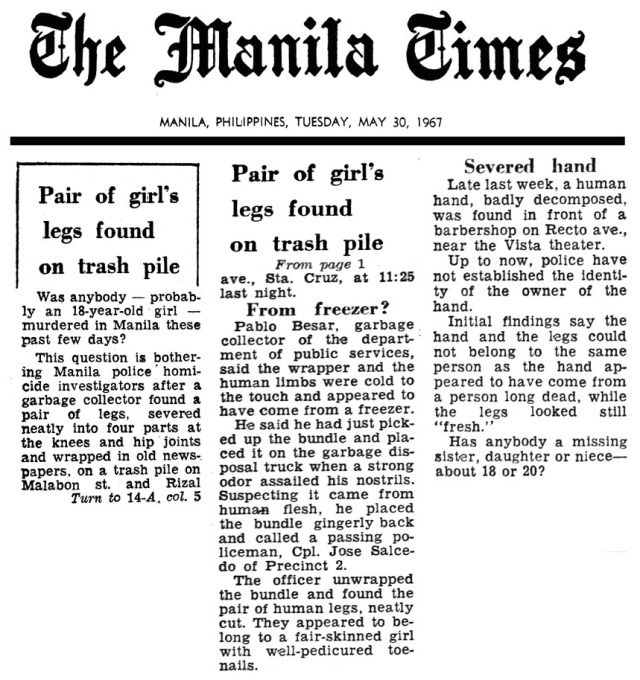 The police, for their part, theorized on the circumstances behind the murder. From what was left of Lucila, they surmised that the murder could only have been committed by someone familiar with the use of knives and such – say a butcher or a surgeon or at least a pre-med student. The killer must have used a private vehicle to dispose of the torso and legs, and because these were very cold to the touch when found, the remains, the police said, must have been stored in a freezer. These led to speculation that a wealthy man may have been involved in the case, in addition to the earlier and credible theory that the killer must be intelligent, methodical and some sort of professional.

After a week of investigating and prying for information, the police still had no murderer to show before the public. And the victim’s head still had to be recovered. This led not a few people to feel that local sleuths, be they Manila’s finest or our intelligence agents, are not fine enough.

On the 15th of June 1967, Santiano, the 28-year old dental student surfaced and confessed to the crime. He recounted and detailed the events that led to the brutal killing. However, a few days later, he retracted and repudiated his confession and insisted on his innocence. But the authorities were firmed on their decision to pursue the case against the new suspect.

In an unsuspecting plot twist, a retired cop, Steve Hodel, claims that his father killed Lucila Lalu. His father is George Hodel, the suspected murderer of Elizabeth Short (The Black Dahlia) in 1947. His father abandoned them and moved to the Philippines, detailing it on his books. Furthermore, handwriting analysis shows connections between George Hodel’s known handwriting and notes written by the Lipstick killer and the Zodiac killer.

Lalu’s case, although Santiano was pinned, is something that can drag on unresolved, as in fact many have in the past. If we consider Steve Hodel’s claims however, does it make me a very sick person if I say… I felt an irrational surge of excitement, knowing George Hodel was once here? 🙂

Here’s a Black Dahlia slideshow (for the lack of Lucila’s body parts):